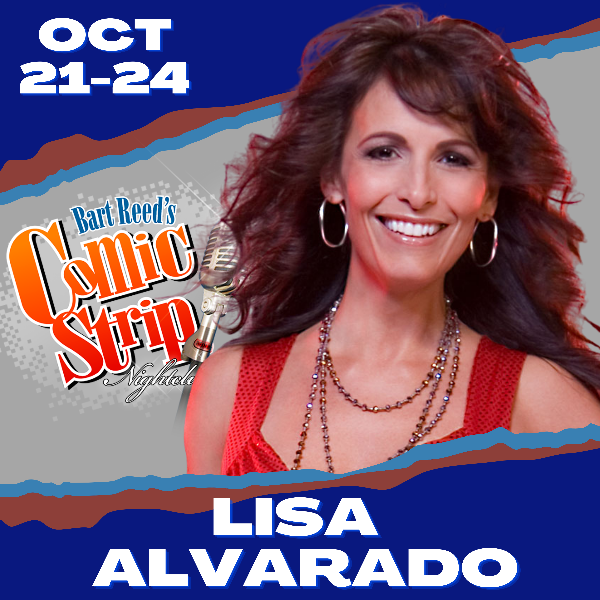 Lisa Alvarado, “The Latin Queen of Comedy” is Tina Fey meets Sophia Vergara. Lisa brings the funny with clever wit and a sassy, fun attitude.Born to Peruvian immigrant parents, Lisa specializes in sharing her background in a hilarious, relatable way!

Lisa is a National Headliner touring the world in many comedy clubs, colleges, corporate events, and military tours. Credits & TV appearances include: Dry Bar Comedy Special, Nick at Nite’s “Funniest Mom in America 2″, NBC’s “Last Comic Standing”, “Comics Unleashed”, “Stand Up in Stilettos” on TV Guide Network, NuvoTV, Comedy.tv, and many more. In Sept 2021, Lisa will perform in the HA! Comedy Festival sponsored by and taped to air on HBOMAX.

Ms. Alvarado was voted “Best Up & Coming Latino Comedian” by The LA Comedy Festival and her jokes have been quoted in The New York Times. Lisa is an accomplished writer as well, as staff writer on two different TV shows, one for MTV3 and the other entitled “Funny You Should Ask” adding over 150 episodes to her credits.In 2020, she sold her first feature length script to a streaming company recently acquired by Sony Pictures.

Lisa is the creator & producer of three original web series, winner of “Best Actress in a Web Series” and “Best Comedy Web Series” Finalist at the Official Latino Short Film Festival. Her first documentary, the critically acclaimed story about a dying man’s final wish to perform Stand Up Comedy and their journey together to accomplish his dream entitled “Don’t Wait:The Michael Schmid Story” is now available to stream at DontWaitMovie.com

As owner, Lisa’s goal at LA Amigas Productions is to empower women and ethnically diverse writers, actors, producers, editors and directors while delivering excellent content with a strong point of view and a sh*t ton of depth and humor.

Jim Coughlin's religion is comedy. His philosophy is comedy. And his ethnicity is comedy. He's been performing comedy since he was 13 and identified as Jim the Juggler.

He has a degree in Theatre from the University of Missouri, is a graduate of the famed improvisational theater: iO (formerly Improv Olympic West) and earned a “Ducktorate” from Disney University in Theme Park Studies.

Jim has starred in several short films including The Human Beeing, as a mad scientist who's invented the worker of the future, a man sized bee. The Human Beeing was featured in over 25 film festivals around the world.

He has performed standup comedy in four countries and across the US. He released his first standup comedy album, A Little Off The Top Of My Head, January 2020.