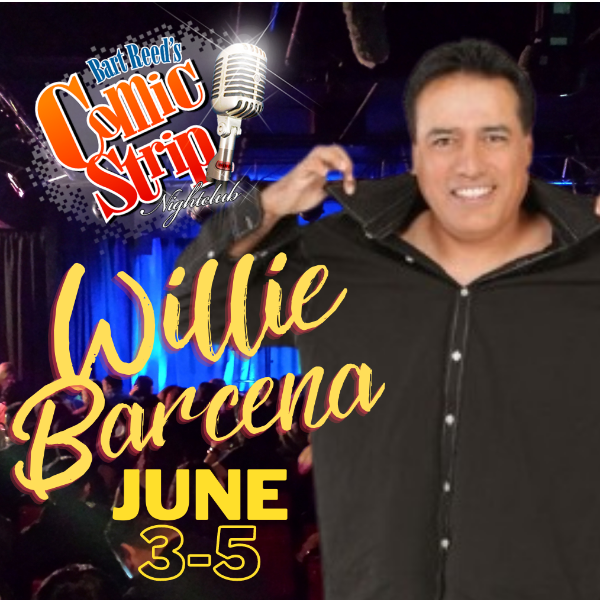 Fresh from his Comedy Central Special "Deal with It" released last May, Willie Barcena is back! His talent has garnered him 11 appearances on ìThe Tonight Show with Jay Leno." Jay even invited Willie to perform for the troops in Afghanistan. Barcena helped provide much-needed laughter to that part of the world. Willie's numerous jobs prepared him for his comedy career. His security guard, plumber, roofer, and limo driver gigs gave him a background for his humor about everyday life. After 12 years of stand-up road work Willie is now ready for new challenges. He has written and performed a one-man show entitled "Cry Like a Man." This highly acclaimed performance demonstrates the struggle of a blue-collar comic in today's society. In addition to being a comedy road warrior, Willie has appeared on many TV shows including: "Moesha," and he was chosen to be the host of the popular SiTv production "Latino Laugh Festival - The Show." He's also made multiple appearances on tours such as "Que Locos," "Latino Laugh Festival," "Montreal's Just for Laughs," and "Crown Royal Latin All Stars Comedy Explosion." Don't miss Willie live in El Paso!

Once declared the Leonardo Da Vinci of radio by broadcast legend Howard Stern, Byron Kennedy has spent the past two decades channeling his comedic colors through the airwaves as a major market broadcast personality and quickly rising to the position of Vice President of programming for several of the nations biggest brands. Continuing on his path to entertain America, Byron transitioned his skills to a major Nashville based record label where he quarterbacked the careers of international platinum selling recording artists. With every step of Byron's career the noise from colleagues, friends, and strangers grew louder encouraging him to take the stage he so often prepared for the talent he represented.

Byron draws from life experiences having served in the United States Army to helping launch the careers of some of today's hottest musical acts and radio personalities. Byron is now taking his talents to the stage as a stand up comedian.