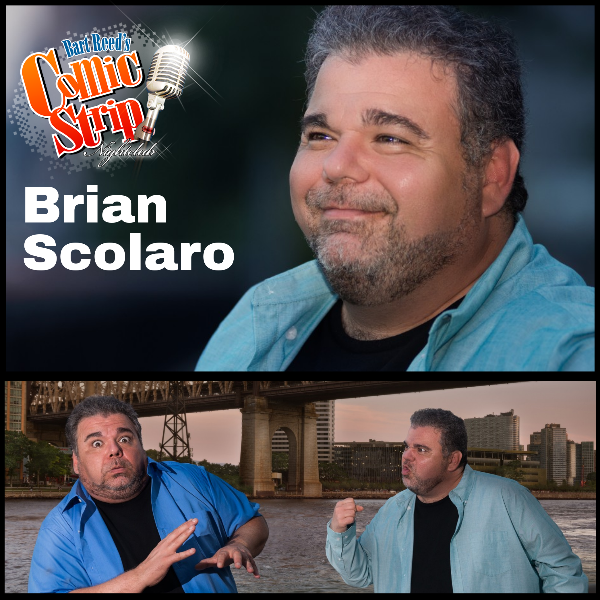 Brian Scolaro established himself as a stand up comedian in Manhattan at Gotham Comedy Club, Caroline's Comedy Club, Stand Up NY, Dangerfields, Comic Strip Live, Boston Comedy Club, Catch a Rising Star and (at the epicenter of stand up comedy in America) The Comedy Cellar on Macdougal Street in Greenwich Village. He appeared in Montreal's Just For Laughs Comedy Festival in 1999.

In 2001, writer Steve Koren saw Scolaro at the end of 12-hour video tape collage of actors auditioning for his NBC pilot Everything but the Girl with Tiffani Amber Thiessen. Koren insisted NBC fly Scolaro in to test and he was hired as a regular cast member for the role of love sick, overly sensitive "Doug". When the pilot was beat to the line-up by Scrubs, Lester Lewis brought him to the attention of Eileen Heisler and DeAnn Heline and he immediately moved to Hollywood to be a regular cast member on the second season of NBC's Three Sisters as the bartender, love interest of A. J. Langer named Gordon.

In 2003, Scolaro appeared as a regular cast member on a popular ABC pilot by director Tom Shadyack called Platonically Incorrect with Tom Everett Scott. The pilot was penned by Darlene Hunt, Gabe Sax and Jeff Judah and even shot a second episode but still did not get picked up by ABC after a long deliberation.

After a holding deal with CBS in 2004, Scolaro was cast as Stuart Miller for Fox's Stacked which starred Pamela Anderson and Christopher Lloyd. Written by Steve Levitan, "Stacked" was a pilot that was guaranteed to air six episodes in 2005 and the following year aired a full second season. Paul Brownfield from the Los Angeles Times said "Scolaro is terrific. An actual sitcom find." During the writer's strike of 2007-2008, Scolaro did stand-up performances on NBC's "Late Nite with Conan O'Brien", ABC's "Comics Unleashed", and was invited back to the channel that started his career as an intern, Comedy Central, to headline an episode of "Live at Gotham". In 2009, he taped his own half hour special for the network "Comedy Central Presents: Brian Scolaro". From 2008 to 2014, Scolaro has had a recurring character of the sad sack, forgetful, Doug, on the first season of TBS's "Sullivan and Son", played numerous characters on HBO's "The Life and Times of Tim", did stand-up on "The Late Late Show with Craig Ferguson" and "Conan", and appeared on AMC's Mad Men, TNT's Men of a Certain Age, Showtime's Dexter, ABC's Grey's Anatomy, FOX's "Bones", ABC's The Middle, Comedy Central's Kroll Show, NBC's Go On, NBC's Harry's Law, ABC's "Comics Unleashed", NBC's "Truth Be Told", Disney's "Crash and Bernstein", and the film The Brothers Solomon.

Steven Roberts is the resident host for The Marsha Warfield Experience, at L.A. Comedy Club at the Stratosphere Casino in Las Vegas, NV. He co-hosts the new podcast Video Jokers with comedian Kristeen von Hagen. Steven earned much attention and respect in the Las Vegas comedy scene as the host and producer of the highly regarded, underground, new-material-only show, THE STOOL. He also produced and hosted the very popular L.A. Comedy Club Roast Battles in Vegas. In February 2018, Steven won runner-up at the Los Angeles-based US Comedy Contest, held at the world-famous Ice House Comedy Club.

A resident of Las Vegas, Steven has performed at clubs and showrooms throughout the Vegas Strip including L.A. Comedy Club, Las Vegas Live, The Laugh Factory, and The Improv; and throughout the country including Zanies, The Improv, and Loonees Comedy Corner. He was proud to be the host for The World Series of Comedy 2014, touring the U.S. and Canada. Originally from the desert southwest, he happily calls Las Vegas home with his husband of fourteen years, Joseph, and their dogs, Hamlet and Egbert. His hilarious commentary on living in Vegas, being a latent Texan, and the joys of gay fatherhood delight audiences from all walks of life.